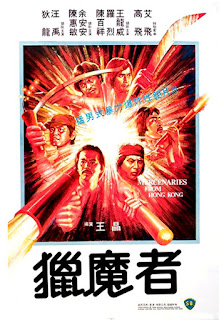 This is an insane Shaw Brother film that I have fallen madly in love with. An action packed popcorn film of the highest order this is a must see.

The plot of the film has a man hill the nephew of a Hong Kong crimelord.  Before he can flee the city he is hired by member of a wealthy HK family to go into Cambodia and kidnap the man who killed her father. It doesn’t go as plan and there is a traitor in their midst. Humor mixes with action and a bleak out look  as a team in put together and the plan is set in motion.

I loved this film a great deal. It has a gritty  go for it style that pulls us in and drags us along. Yea some of it looks a bit dodgy, I mean some the cars that get crashed early on look beat up to start, but the pacing is intense and the turns are never quite what we expect.

I’m still trying to figure out why more love isn’t shown the Shaw Brothers modern day action films. Everyone I have ever seen has been lean mean machines that absolutely delighted. They never felt run of the mill, which some of their period martial arts film do at times. There is a real sense that they were trying to do something more than the usual and it resulted on stunning films like this.

I am so unhappy I didn’t see this at the Fantasia screening because this is a big screen movie that demands to be seen with an audience.

Go get some popcorn and a beverage of choice and enjoy