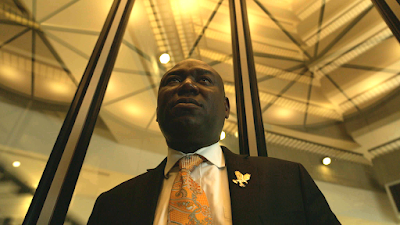 Apologies to everyone connected with CIVIL. I was given a screener for the film in connection with the Tribeca film festival, however because of issues with my Netflix account it took me a while to finish the film.

CIVIL is the story of attorney Benjamin Crump who is hired by families looking to sue the police over civil rights violations as well as other important cases. We follow Crump over the course of the year and see him handling a small number of the cases he handles including the one for George Floyd.

This is a very good look at the problems being faced by African Americans in their contact with the police. The film puts us at ground zero on the cases that are shaping the future of how the police and public interact. It’s a heady and heartbreaking film that makes it clear that there is a hell of a lot going on beyond the typical high profile cases. This is a vital film that is very important for that very reason. George Floyd is just the case that broke the surface, there is so much more going on below it.

If anyone is going to have any trouble with the film it is going to be that the film is kind of visually static. Much of what we see is Crump sitting on a cellphone or on a computer talking to people. While what we are hearing is extremely compelling it isn’t the most exciting thing and if you need to be visually stimulated every minute this film isn’t for you.

On the other hand turn up the volume and listen because what is being said is important.