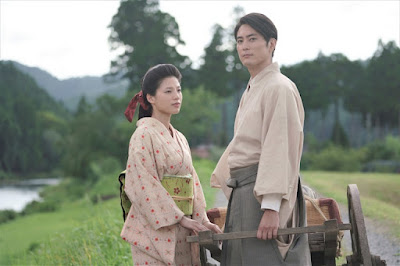 Based on Hakai (Outcast) by Toson Shimazaki a classic novel seeking for tolerance the burakumin minority, the film follows the fortune of a young man who leaves his home town at the age of 16 and is told by his father go make a life for himself, not return and under no circumstances  reveal that he is burakumin. He goes off and finds success at school, becoming a teacher in a small village. However when  racism rears it’s head he must decide whether to go a long or make a stand.

Okay film version of an oft filmed story never quite generates the sparks it should.  Looking more like a TV drama then a big screen film the film would have worked had the performances not been all over the place. While the adults are mostly good, the problem is the kids that make up the students are pretty much poor across the board. We never believe them and as a result we end up never emotionally invested. Watching the ending, which should have been a teary ending, al I could think was I was watching the end of Dead Poets Society with non actors as the kids. I should have been tearing but instead I was looking at a list of films trying to deduce what to watch next