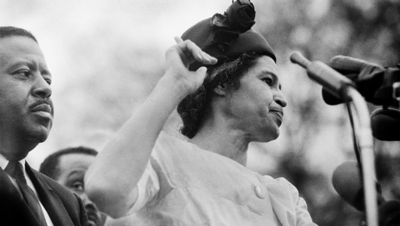 The life and times of Rosa Parks, best known for refusing to give up her seat on a bus in the segregated south. The truth is there is a hell of a lot more to the small woman than most people know. She was politically active from an early age and never stopped trying to change the world.

This is a really good look at a woman who was revered  by millions around the world. She was a woman who shook the pillars of heaven and influenced unexpected people. For example when Nelson Mandela came to the US  he was going along a receiving line shaking hands until he caught sight of Mrs Parks and he then bolted to her and snatched her up and gave her a bear hug. This is a film that is going to go along way toward enhancing her reputation simply because it lets everyone know how special she was.

If I have any problem with the film it's that the film drops the linear structure a couple times to jump a head for  various reasons. While I understand why it was done, thematically the flash forward tied into the moment at hand, the problem was that we didn't have a set up for them. For example The Republic of New Afrika is mentioned but fully explained.

Minor quibbles aside this film is a must see simply because odds are you don't know the full story of what Mrs Parks did, and you really need to.