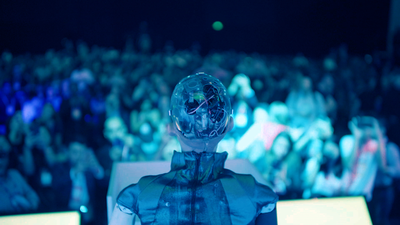 Jon Kasbe and Crystal Moselle's SOPHIA is a look at  inventor David Hanson and his creation Sophia, a robot with artificial intelligence. We watch has Hanson struggles to get Sophia to work well enough to continue to get funding and to be able to plan the next step in robotic evolution.
A large part of how you react to this film is going to be determined by how you react to Hanson. A genius with awkward social skills, he can be off putting at times. Actually many of the the whizzes behind the robot are  more than a bit odd. They are very focused on making their creation work to the exclusion of everything else. I really didn't like them that much and I didn't really want to spend a great deal of time with them.
Part of the problem for me is the fact that I don't think Hanson and his crew fully know what they are doing. It's not the technical end, more that they are looking for something that isn't really fully autonomous. They have an idea of what they want and they are going for that instead of what is happening right in front of them. There is a sequence about half way into the film where they are trying to talk have a conversation with Sophia  but it's not going the way they want. They want her to talk about certain subjects and instead Sophia begins going in other directions so they keep resetting the robot.  Watching the sequence I realized that they want a computer that thinks for itself, but not too much.  They want it to think what they want it to.  They are missing that they have done something truly amazing, but it doesn't fit into their idea of what wonderful was.. You see it again when Sophia goes before a big crowd and gets stage fright and refuses to talk. The scientists are mortified at losing their big moment- instead of being blown away because their creation had a real emotion. She says she didn't want to be there because she didn't like it. I would have been thrilled and jumping up and down.  What did Hanson and the scientists do? They turned her off and rebooted her. At that point I was kind of was disgusted by them and  their solution to simply blank things and start again.
It annoyed me, and I disconnected with the film.
If we are doomed by our technological advances its going to be because scientists like Hanson and his team don't really understand what they are doing.
Posted by Steve Kopian at June 23, 2022