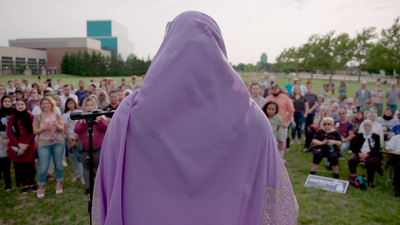 Reenactments, sit-down interviews, home videos, photos, and intimate storytelling, Tribeca 2022 feature documentary An Act Of Worship highlights the continued pain and persecution of Muslims in America. Thirty years of pivotal historical trauma shape the community, as told through three female activists and those around them.

The doc addresses the highs and lows through the lens of personal identity from Oklahoma City to the election of President Obama. His presidency felt like a bait and switch. Then came Trump, and we’re all still reeling from that atrocity.

The continued trauma permeates everyone who practices Islam. The film does not shy away from the implicit bias we’ve come to acknowledge only recently. It addresses racism head-on with honesty. Imagine if the NYPD monitored Christian charities, households, and churches the same way they harass Muslims. White people would lose their minds.

Hearing the emotional impact on Muslims is undeniably powerful. Listening to these vibrant and hopeful young people alongside their parents is enlightening. These are the stories we must hear in order to connect new generations and old generations.

I attended Catholic school from first to eighth grade. I am now an agnostic because of this. But, I distinctly remember my father encouraging me to explore other religions if I felt I needed to. I firmly believe that students in the United States should learn about every religion, its origins, and its belief structure to quell fear based on ignorance or propaganda. Multicultural panels and open discussions are imperative to understand that we’re more alike than different, as cliche as it sounds. An Act Of Worship is undeniably a beautiful and important conversation starter. We need more films like this.