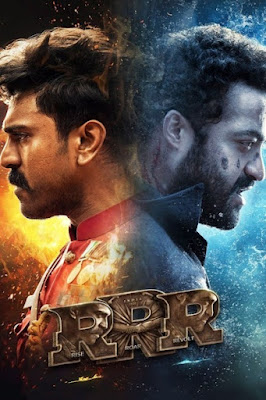 After years of Hollywood franchise glut—of reboots and remakes, spin-off miniseries and bloated two-part finales—watching S. S. Rajamouli’s Telugu-language epic RRR is like taking that first breath of outside air after being cooped up all day in an office building with no air conditioning. It’s like taking a long, cool sip of ice water after days in the desert with nothing to drink but lukewarm Diet Coke. It’s like being reminded for the first time since you were a child amazed by the moving pictures on the television that movies can truly do anything, say anything, and be anything. It’s not just the most triumphant, crowd-pleasing blockbuster in years, it’s the best, most exhilarating action movie from any country since George Miller’s Mad Max: Fury Road (2015).

The film centers on two real-life Indian revolutionaries who fought against the British Empire in the early twentieth century. The first, Alluri Sitarama Raju (Ram Charan), led guerilla campaigns in southeast India on behalf of indigenous tribal communities after the colonial government restricted their movement and livelihoods. He successfully dodged British manhunts for two years before being captured and killed. The second, Komaram Bheem (N. T. Rama Rao Jr.), helped lead a revolution against Britain’s puppet leaders in south-central India. After being killed by policemen in 1940, he was deified by his tribe and remains a symbol of armed rebellion to this day.

In truth, Raju and Bheem—despite being revolutionary contemporaries—never met. But after reading about them, Rajamouli envisioned a world where the two not only crossed paths but became close friends and allies. RRR, then, is the product of this fantasy. It’s about as historically accurate as a movie about the American Civil War where George Washington and Benjamin Franklin sail to England, shoot their way through Buckingham Palace, and defeat King George III in hand-to-hand combat. But RRR’s rejection of historical reality is its greatest strength. By ignoring what actually happened, Rajamouli dreams of what could have happened. Filtered through the maximalist bombast of Indian cinema, the results are nothing less than pure cinematic mythmaking.

Rajamouli recasts Raju as a quisling police officer working for the British government. Determined to climb the ranks of the British Raj, Raju devotes his life to the tyrannical British Governor Scott Buxton (Ray Stevenson), doing his bidding even when it involves persecuting and terrorizing his fellow countrymen. Raju soon finds himself on the trail of Bheem, recast by Rajamouli as the guardian protector of the indigenous Gond people. After Governor Scott’s cruel wife Catherine (Alison Doody) kidnaps one of their young girls to become her personal songbird, Bheem sets out on a mission of vengeance to rescue her and punish her British captors. However, in a twist worthy of Shakespeare, a case of mistaken identity leads to Raju and Bheem becoming best friends after working together to rescue a drowning boy. As Bheem gets closer and closer to locating the kidnapped girl, so too does Raju get closer and closer to uncovering the legendary protector of the Gond people, not realizing until too late that it’s his new companion. What happens when best friends become worst enemies? And, perhaps more importantly, is there more to Raju than originally meets the eye?

Like many Indian films, RRR is over three hours, but it whizzes by faster than most hour-long episodes of television. Rajamouli breathlessly skips from one gob smacking set piece and action scene to the next with nary a wasted breath. Key to Rajamouli’s method is a refreshing lack of self-awareness—there isn’t a hint of irony or sarcasm anywhere in this film. Whereas in recent years American blockbusters have developed the cancer of self-deprecating self-awareness—how many times have we heard Marvel superheroes making fun of each other’s names?—Rajamouli grabs his audience by the throat and throttles them with emotion and spectacle like an overly caffeinated child. Montages of Raju and Bheem happily riding horses together play as a musical narrator ponders the future of their friendship. Young boys swear oaths of vengeance over the bodies of their slain mentors. Grown bare-chested men shout, scream, sing—and yes—dance their emotions to the heavens. More than once the action is interrupted by musical numbers including the show-stopping “Naatu Naatu” sequence where Raju and Bheem challenge a group of British officers at a party to a dance off. Watching this film in the theater marks the only time in my movie-going life that I’ve witnessed an audience joyously clap along with the music onscreen.

RRR has shot up to the top of my list of the best films of 2022 and will almost certainly end up one day in my top five favorite films of the entire decade. But there is one thing about it that gives me pause: in creating a new mythology surrounding the Indian Revolution, Rajamouli has rewritten it as one led, executed, and won by the country’s Hindus with no contributions from the millions of Muslims who also called India home. One hopes that such revisionism was unintentional, but deliberate or not it represents a recent worrying trend of Hindu nationalism in modern India. Stoked by their populist right-wing Prime Minister Narendra Modi, anti-Muslim (and anti-Christian) sentiment has recently exploded throughout the sub-continent. One can only hope that in future years this superb entertainment won’t be looked upon as a portent of political atrocities.
Posted by Steve Kopian at June 17, 2022