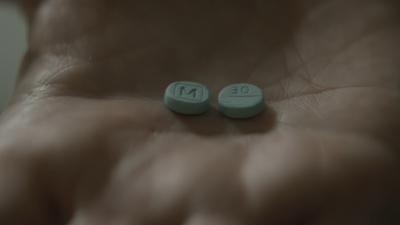 This a portrait of Chris and Jeff George who took advantage of the lax laws in Florida to open up pain management clinics in the state which made them tens of millions and created tens of thousand of addicts because they would give anyone the prescription drugs they wanted. They were so good that people traveled from across America to get their fix.

Funny true crime drama is a damning portrait of greed and lax governmental control that in the words of one of the guilty "destroyed society". The Georges bent the rules and hooked generations. Its a frightening tale that amuses until it catches in our throats. The unexpected moment when one of the characters reveals why he worked for the Feds had me sobbing. It was a genuine  moment that hit hard.

This is a vital and an important film....it's also damn good.