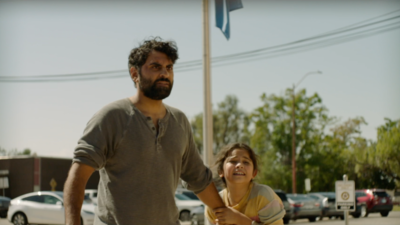 Land of Gold is about Kiran (played by Nardeep Khurmi, who also wrote and directed it) who is an Indian truck driver. He's about to have his first kid. He doesn't seem too excited about it and wants to hit the road one more time before the baby comes for some extra cash. (His wife isn't too pleased about him leaving.

After being on the road for a little bit, he hears a pounding sound coming from the back of the truck. He gets out, opens the door, and a girl jumps out (probably between 8-10 years old), she uses mace on him and runs away. She doesn't get far before passing out.

Kiran carries her back to the truck and puts some ice and cool water on her. She wakes up and we soon learn her name is Elena and she's on her way to Boston to her uncle's. She won't say too much about herself, her parents, or where she came from.

What follows is their road trip to Boston. The pair both fight and bond. The connection that forms between them is delightful.  At first, Elena seemed bratty and annoying, but not too long into it, I came to like her.

This film is about family, cultures coming together, and what it's like to be undocumented in the US. I don't want to give too much away. I almost didn't see this movie, but I'm really glad I did. It's been one of the best of the festival. Land of Gold will move you.