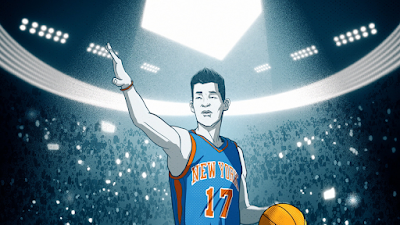 Transcending just being a sports film 38 AT THE GARDEN is super look at how our expectations based on race are more often wrong. Lin was a high school superstar who despite having a great high school and college career was over looked by the NBA. After all everyone knows Asians can't play basketball despite the fact that Lin rocked the house. Managing to secure an NBA spot only to be bounced around until he ended up as part of the Knick organization. His place was so unexpected that security didn't want to let him in to Madison Square Garden. It wasn't until injuries forced the team to use him that Lin hit the floor and changed everything

Long short film (38 minutes)  about Lin-sanity and how Jeremy Lin shattered expectations by taking New York City and the world on a wild and crazy ride for a few weeks ten years ago. Its a glorious tale not only about an under dog finding his place among the big dogs, but also about how it changed how people see Asians. Lin delighted millions who finally got to see someone like them on the basketball court. Lin opened doors and opened eyes.

While the film tells an important story, it also is great ride. There is so much joy in the Lin-sanity story it can not help but make you smile. I loved this film and I can't wait to see it again.