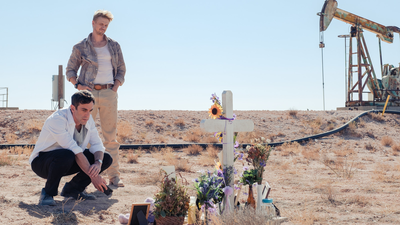 B.J. Novak writes directs and stars in the story of a New Yorker writer  who is contacted by the family of a casual acquaintance he hooked up with a couple of times. They think he was her great love and called him to let her know she died.  Confused and desperate for a story for a podcast he heads to Texas for the funeral. Once there he sees an opportunity to investigate her life, under the pretense of helping her brother look for vengeance for the murder of his sister.

Almost always on target film goes through various changes of genre as it goes. Comedy becomes drama becomes thriller becomes social commentary as it becomes a vice grip tale you can't look away from.  This is a film that starts am cringey sort of film that ends up a deeply moving story that will have you pondering what is important in life.

I was rocked by the film. When the screening ended a bunch of us looked at each other and just gestured about how much we really liked it. When words returned we talked about the wonderful turns that were unexpected and expected but which always seem right. None of us saw that coming.

This film was an unexpected joy. When the film started and Novak's character was annoyingly nebishy, I was certain I was going to hate the film, instead I found a film I can't wait to see it again.