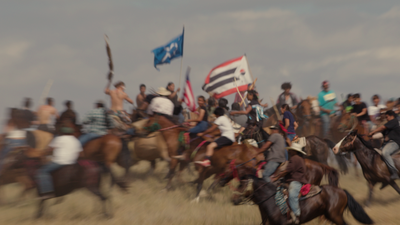 LAKOTA NATION VS THE UNITED STATES is the story of the Lakota people from the coming of the Europeans on to the present day. It explains why many feel they are still at war with the United States because they broke every treaty they ever made and generally did everything they could to wipe them out.

Deliberately paced and thorough the film is hard look at the last five hundred plus years of interactions that will probably blow the mind of most people. I say this because most people don’t consider Native Americans much. They are either just another ethnicity or something the cowboys fight in the movies or dime novels. While people are aware of some of what happened, most people don’t realize to any real degree the level of bullshit the American government dumped on the Lakota and other nations. This film sets the record straight and it is why this film is vital and important.

If the film has any problem it’s the pacing.  Deliberately paced like a long walk in the country, the film feels longer than it’s two hours. While the film fills almost every minute with information it still feels long. I’s not fatal thing by any means, however I am very aware that some people might turn it off.