Marcel The Shell With Shoes On(2021) opens today 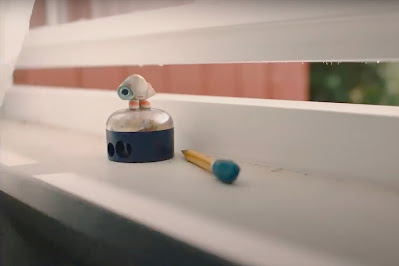 Marcel and his grandmother Connie live in a big house that is now an AirBNB. When the home is rented by filmmaker Dean, Dean begins to film Marcel and his life. Marcel talks about how his family disappeared when the previous owners of the house left and how he'd like to find them. With the help of Leslie Stahl and 60 Minutes there just might be a chance for them to be reunited.

Based upon a serif es oshort films and a children's book, this feature length film is going to warm the hearts of everyone (while it also breaks the hearts of adults). This is a wonderful look at a small shell who is loving and innocent and the sort of person we should all strive to be.  You'll want to find the house where they live and rent it just so you can meet Marcel.

Seeing it in a theater with critics and kids was an interesting experience since while everyone was laughing and getting teary, you could hear the laughter some times catching in throats  as moments the kids laughed at not being as funny to the adults who could relate to the deeper meaning of a grandmother with dementia or a parent putting on a brave face  for the kids even though they know it will cost them. My laughter was mixed with tears of deep sadness.

However least you think this is a maudlin film, it is not. It is a transcendent film that shows us more about life than the vast majority of films made anywhere. This is a film that perfectly shows us there are levels to life and in the good times there is a bit of sadness and in the sad times there is joy. Frankly this is a gloriously complex film hidden in a cute kids film.

Apologies if you want me to rattle off fun moments in the film or explain everything to you. I can't do that. This is a film that is a journey. The free flowing tears, smiles and belly laughs we have at the end have to be earned by taking the trip. I will not short change you, nor the work of the filmmakers, by giving you clues.

All I will say is this is one of 2022's best films and destined to be a classic.

It is highly recommended- just bring a lot of tissues.