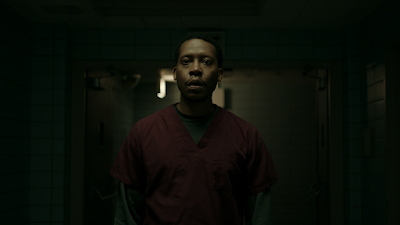 First things first ROUNDING is no a horror film. Its more a psychological portrait of the main character that uses horror images. It is a film that will flummox you if you go in with any preconceived notions. It is a film that does not do what you think it will and does not behave as anything other than itself. I give this warning because I had to stop and not think about what I was seeing.

The film is about a doctor named James Hyman who transfers to a small rural hospital for his second year residency. Hyman had a mental collapse when a patient died and he feels that new set of surroundings will help him. Things are okay at first, but a patient who seems to have asthma but yet doesn't confounds him. Losing himself in trying to help the young woman Hyman slides farther and farther over the edge.

I am still processing this film because I went in expecting a horror film. As I said above I fought it for a chunk of its run time. Finally when I let it go I found it so much better because I could see the rhythms of the tale-rhythms that are not ones of horror but of a portrait of a man coming undone. That's not giving anything away- since there are still mysteries to solve. Instead of giving anything away it opens things up it gives us more material to chew on. It also makes the answers less easy. In a horror film answers tend to come in certain categories, say monsters, the supernatural mental illness. In real life things are less definite, less clear cut. ROUNDING isn't really clear cut. It's horrible at times but there is also great depths of sadness.

To be honest the best thing I can say about this film is its going to haunt you. If you want a film that will engage you many levels this it. As this posts its been several days since I've seen the film. I've revisited this piece several times to tweak it or consider tweaking it simply because I can't let it go. Films you can't let go are the best kind.

See ROUNDINGS and see a film that will haunt you.