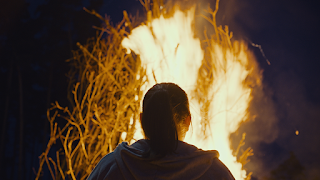 One of Tribeca 2022 Midnight selections features the sickest fad diet you could ever imagine. When Simi joins her famous nutritionist aunt for the Easter holiday, the tension in the house boils over almost immediately. Simi, an overweight 15-year-old girl, seeks approval and guidance, but things do not go according to plan. Family Dinner is a film that slowly and deliberately crawls under your skin.

Michael Pink creates a lecherous character arc for Stefan. His presence made me shudder with each appearance. Alexander Sladek gives relentless nuance to the role of Filipp. Displaying all the characteristics of a serial killer, what lies beneath the surface is even more disturbing. Sladek is unnerving.

Pia Hierzegger plays Auntie Claudia with an energy that is powerful and scary. The head of the household in every way possible, Hierzegger is astounding. Nina Katlein is spectacular as Simi. Despite every red flag, the bravery in Katliein’s eyes is shocking. Writer-director Peter Hengl’s script allows Simi to be a feminist icon.

The complexity of this script kept me guessing from beginning to end. Just when I thought I’d figured out what was going on, another twist. Much like in the films A Banquet and Honeydew, the preparation and consumption of food become weaponized. The infantilization between mother and son sent shivers down my spine. It is an added layer that compounded my unending distress. If you follow the proverbial breadcrumbs, the finale feels like a natural endpoint to a series of microaggressions that become exponentially more horrendous. Family Dinner had my heart in my throat with bona fide fear. Tribeca audiences are in for a frightful treat.