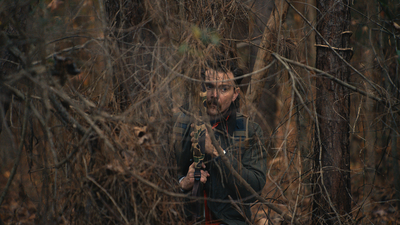 I’ve only shot a gun once in my life. I’ll remember it forever. It was 2008, a hot summer day in Idaho. We were on one of those aimless teenage road trips, far from San Francisco and still without any real responsibilities, so when one of our group had a local friend who was willing to take us shooting – well, then hey, why not?! I remember the giddy feeling as we drove out to a dusty side road, and that the pistol I picked up had the Punisher logo carved onto the grip. I couldn’t quite make out the targets we were to aim for, so I gestured with the pistol, seeking confirmation. Suddenly, the fingers of this local friend were clamped vice-like on my wrist, his voice like fire in my ear. “Don’t point. Not a toy.” That giddy feeling? Gone.

This teenage memory caused me to sympathize deeply with The Integrity of Joseph Chambers, which also centers on a goofy man who is both overwhelmed and armed with a deadly weapon. Joe (Clayne Crawford) is an insurance salesman who envisions himself as a survivalist. He leaves his wife and children at dawn to hunt deer. Time to bring home the bacon (or, well, venison.)

The problem is, the emperor has no clothes. Joe is a total fraud. He is basically performing the character of a hunter – shaving his beard into a macho mustache, dressing up in an outfit straight out of a hunting catalog, and trading his shiny BMW in for a mud-flecked truck. The fact that Joe is also hunting on a friend’s private land only adds to the charade. He uses his rifle as a makeshift machete to clear a path through the underbrush. We are not surprised when things go wrong.

Despite what might seem like low stakes, I’m happy to report that The Integrity of Joseph Chambers is one creepy movie! Cinematographer Oscar Ignacio Jiménez and sound designer Peter Albrechtsen deserve tremendous credit for creating this uncomfortable atmosphere, and for sustaining it during the long middle stretch of the film where Crawford is the only human onscreen.

This is the second collaboration between Clayne Crawford and director Robert Machoian (following 2020’s The Killing of Two Lovers.) That collaborative familiarity provides the foundation for a wonderful Clayne Crawford performance. Joe is alone most of the film; the supporting characters are mostly thin after-thoughts. Crawford shines conveying his inner desires and struggles. I loved how deliberate he was with his movements, and the way he ensures Joe often serves as a visual gag against the background of the woods. We manage to learn a lot about Joe despite not knowing him very well by the end of the film.

It is impossible to consider The Integrity of Joseph Chambers without acknowledging the national tragedies and anxieties surrounding the topic of gun control. Here we are presented with a family man whose life is twisted in knots over the course of a single day. Surely, it is not the fault of his rifle? This is not an anti-gun film, but it speaks loudly regarding the power these weapons hold over the male psyche.