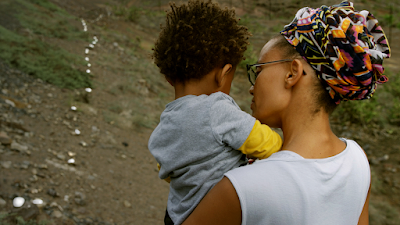 Annina van Neel went to the island St Helena to help with the construction of an airport. Along the way she discovered the island's history as a place where thousands of Africans were redirected by British ships from the middle passage to slavery. In theory they were being recused but they were ending up in a situation that was just as bad. Thousands died and were buried and forgotten. The graves of the thousands were rediscovered when an access road was planned over the graves.  van Neel  realized that something had to be done, but would anyone listen?
This film needs to be seen on a big screen.  Not only is this a beautiful film, its also a perfectly modulated film of sounds and silences that wash over you in waves in a darkened theater. Its a film where the presentation adds volumes to the emotional resonances of the story.  This is big screen movie of the best kind.
The story being told here is going to rock your world. Not because the story is anything special unto itself, rather its because as framed by directors Joseph Curran and Dominic Aubrey de Vere the story becomes something greater. Yes it's about respecting the dead, but it also raises questions about how do we meld the future and the past, it makes us ponder what we need to do to have progress and it reveals layers of hidden racism. And there is even more going on.  There  is so much going on in this film that I know I didn't catch it all. I need to see this film again when I can sit and watch it and no have my knees buckled and my heart broken by what I'm seeing.
I was moved to a place beyond words. This was one of those films that made me want to say something but didn't give me words to express what that was. I'm still not sure what that is.
Frankly this film a masterpiece. It's an eye opening soul rattling masterpiece.
See it.
Posted by Steve Kopian at June 25, 2022