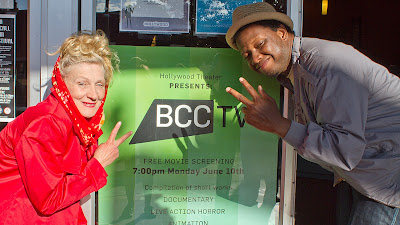 Three homeless people take advantage of a program at  local homeless shelter and learn to make movies and use it to find a direction in their lives.

A sweet little gem of a film  over comes an initial feeling of having been here before by flipping things and focusing not so much on the the program itself but the people involved instead. Having seen numerous docs on the power of programs to change people where the director remains at arms length from the participants and focuses instead on the program and the people running it, here the focus is squarely on the people and we are so much better for it

Bless director Melissa Gregory Rue for being bold enough to turn the camera on and let it run while at the same time letting everyone talk. The camera never seems to look away and as a result we really get to know the people we are following. We get to see the changes taking place because we really get to see th change happen.

What a marvelous film.