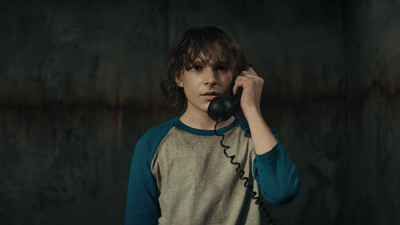 Word over the last year on BLACK PHONE was how  great the film was. It was supposed to be a return to the territory of director Scott Derrickson's SINISTER and people were telling me I "had to see it". The word  in the film community was such that there was genuine excitement that it was screening at the Tribeca Festival and sadness when the film was briefly pulled from the press screening schedule.

And now  that I've seen it I'm wondering what film the raving writers saw because the film I saw at the Tribeca Festival was an okay supernatural tale that seemed to be cribbing from so many other films.

13 year old Finney is kidnapped by a fiend known as The Grabber who is pulling boys off the street. While he is locked in the cellar, the disconnected phone begins to ring. Its the boys who previously had been kidnapped and killed calling to help him escape.

Let me be blunt, this film never worked for me. I spent the entire time talking to the screen, and writing notes asking questions about everything that happened. The problem is the plot is constructed not around real events but around deus ex machina moments that exist to drive things forward. From the sister being psychic to the clues from the dead kidnap victims to what happens after the combination lock, there are no genuine moments anywhere here. Every moment is geared to getting to the next big moment.

The writing isn't all that good either. The dialog is completely artificial. It sounds like a bad riff on a Stephen King film instead of good adaption of the Joe Hill story. I mean the dialog is right out of a King novel except it's not. (And yes I know Hill is King's son)

Worse, there are no characters. Everyone is an idea. and not a person, Plucky hero. Tough protector. Strong sister with special powers. I won't even discuss Finney's father, except to say that he is one of the worst written characters ever put on screen. There is no connection to reality. He is a huge WTF.

The biggest problem is The Grabber himself.  He isn't a character but a mask  mixed with riffs on other  monsters, real and cinematic. I mean Black Balloons are a riff on IT, the basement looks like it came from Derrickson's SINISTER,  there is a hint of Buffalo Bill from SILENCE OF THE LAMBS, the fact he's a magician is a call back to John Wayne Gacy. Grabber's non-masked face with the top hat is a dead on copy of the killer in the Danish film FINALE. It all looks great, but there is no fear.And yea the film really does look great. There are also some beautifully staged moments (even if  the scares are just loud noises) and haunting images but they carry no weight beyond looking cool.  The great looking extends to The Grabber's mask which is destined for classic status despite being attached to a weak film.

I also have to confess that the film suffers because there have been way too many similar films recently. Watching BLACK PHONE I couldn't stop thinking of THE BOY BEHIND THE DOOR which Shudder grabbed last year.

In fairness BLACK PHONE isn't bad, it's just not as good as the word of mouth. It's interesting in a fairy tale sort of a way, just with no scares.