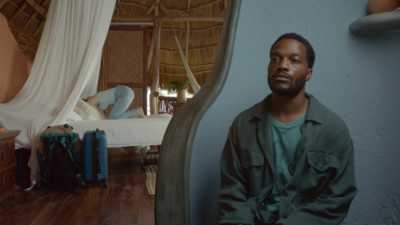 I’m a huge fan of Sarah Adina Smith‘s work. Midnight Swim, Buster’s Mal Heart, and most recently Birds of Paradise are an eclectic group of films that show her imagination and vision are one of a kind. Her latest Tribeca 2022 film is no exception. In The Drop, Lex and Mani are a vivacious married couple trying to get pregnant. Lex does the unthinkable after they arrive at a friend’s destination wedding. She allows the bride’s infant daughter to slip from her grip. The fallout from this moment sends this group of close friends into a tailspin of pretentiousness, ego, judgment, confessions, and chaos. The Drop is a proper hard R-rated adult comedy. The laughs are endless. Huge quirky personalities clash in a way that doesn’t let anyone off the hook. The film centers on parenting styles, communication, and the facade we all put up to survive. Smith and co-writer Josh Leonard skewer Millenial culture in the most brilliant ways possible. Anna Konkle and Jermaine Fowle lead this ensemble cast of your dreams. There is not a weak link in the bunch. The Drop is a crowd pleaser you’ll want to see with your closest friends. Then you can all sit around and decide which asshole character most represents you. You’re welcome. 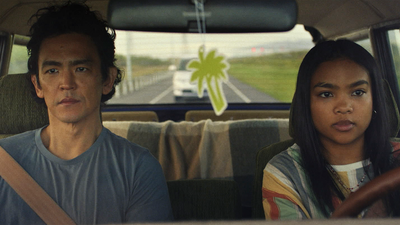 Hannah Marks is a damn gem. Her films have insight and heart for days. Her latest Tribeca 2022 film, Don’t Make Me Go, takes on a father-daughter relationship that will shake even the hardest of hearts. John Cho and Mia Isaac play Max and Wally. When Max discovers that his headaches are a brain tumor, he takes a reluctant Wally on a road trip to his college reunion. The journey serves a dual purpose; spending time with Wally and reconnecting with his ex-wife and Wally’s estranged mother. The screenplay by Vera Herbert is overflowing with coming-of-age moments, humor, and grounded conversations about mortality. It manages to be a story of redemption through creative means. We watch Wally make one bratty and irresponsible decision after another, yet her actions are ceaselessly relatable on the journey of finding your identity. Max is chasing the clock and lies to Wally for most of the film. With the purest intentions and all the love and emotional sacrifice a parent can muster, Don’t Make Me Go is a beautiful story about vulnerability and living life to the fullest every day.