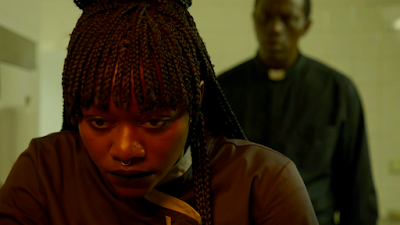 Marie is a chef at a retirement community who recognizes a new priest as being the bad man behind something that happened to her back in home country. As the priest becomes part of the community she has to find away to deal with the horrors of her past.

This is one of the quiet gems of Tribeca. Everyone I spoke with coming out of the press screening was rocked by the film. The reaction was so strong I had to take steps in order make sure I saw the film. Having seen the film I completely understand the reaction of everyone who saw it. I also know why the film was the Audience Award Winner.

Beautifully crafted on every level, the film puts it's audience in a death grip because it takes takes the time to set everything up. We are invested in characters well before the priest shows up. When we see how Marie reacts we react as well. We react more as we watch how the events play out. I wasn't ready for it and it made me want to climb up onto my seat.

This film is a stunner. I don't know what to say. While many people at Tribeca were talking about Black Phone and the horror films as scary little films, those films have nothing on the suspense of OUR FATHER THE DEVIL creates because this is the horror of real life.