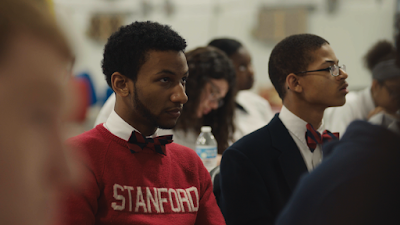 Accepted is a documentary about the school T.M. Landry, which has been around for 12 years and is located in Louisiana. It's an unconventional school; there are no textbooks, no homework, and there's no class schedule. The school is geared towards low income families. They are famous for having a 100% college acceptance, and over 30% go to Ivy League colleges. They have even become famous for viral videos showing students reactions as they find out they've been accepted into these colleges.

As someone who was unfamiliar with this school, I thought the documentary was just going to be about the school and its students and the process of applying/getting into college. However, things weren't as they seemed, and the documentary took an interesting turn when The New York Times wrote a piece exposing the school for falsifying transcripts and doctoring college applications. They further went on to say that the school fostered fear and abuse.

The documentary focuses on a handful of seniors at the school, their perspectives and experiences, and also shows us what their lives beyond school are like.  After watching this doc, I spent some time googling to find out more about the school, read articles that had come out, and updates since the film was made.  I also noticed there's half hour doc about the school on HULU, which might be interesting to watch and compare to this. I found the documentary interesting.  It really makes you think about the American school system and what some will go through.