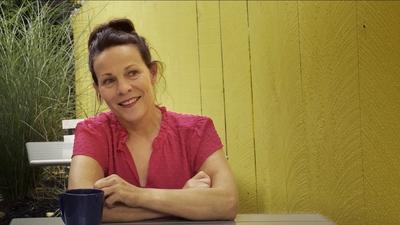 Andrew Bujalski attempts to make a film where no actor ever actually appears in the same space as their scene partners.
In year three of the pandemic, we’ve been watching cleverly shot movies made through zoom and phones. Despite the star power and phenomenal writing, There There falls flat. I never realized the emotional impact of a two-shot until I didn’t have any in a film. The musical transitions between vignettes performed by Jon Natchez made the flow even more disjointed. Admittedly, it took me until midway through the first scene between Lili Taylor and Lennie James to realize there were not in the same room. I cannot say the same for the next story in which Taylor and actress Annie LaGanga. The script is overlong, and the editing doesn’t help.
The third story of a parent-teacher conference is, hands down, the most intriguing. As a former educator and current parent, I was squirming in my seat. It’s cringeworthy and brilliant. Jason Schwartzman reigns supreme in the way only Jason Schwartzman can in the subsequent two scenes. I’ll watch him do anything. Finally, we come full circle with Lennie James ladies man and Molly Gordan‘s teacher, decompressing from the day from hell. This editing is the best sleight of hand by a long shot.
Performances across the board are outstanding. It is a cast from movie heaven. I feel compelled to reiterate that Bujalski’s concept of interconnected storytelling is slick and works 90% of the time. If There There were ever reshot with this cast in the same place at the same time, I would watch that version.