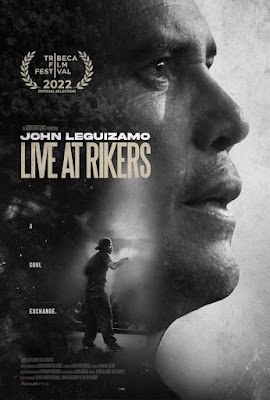 John Leguizamo goes to New York City's Riker's Island prison to perform Ghetto Klown for the inmates and talk to them as well.

Feeling more like a proof of concept film then a fully formed film, the film tries to be both a record of Legizamo's performances and one of his talk with inmates. The result is a film that kind of feels half finished and it leaves us wanting more.

The problem here is that while the film uses the performance to counterpoint what is being discussed in the meeting with the inmates, the truth is the more interesting stuff is the talks with the inmates. At a time where Riker's Island is self destructing due to neglect to the point its appearing in the papers almost every day, the more interesting bits are stories of the guys locked up there. I wanted to hear more from them and less from Leguizamo, not because there is anything wrong with the performance but because this was the one time these guys could say their piece. I wanted to see more of them.

As an addendum I saw the film again today as part of the shorts block and I realized  the film is much better on a big screen. Seeing the film where we are focused on the film made it so much better. That said this really does need to be expanded into a feature film.