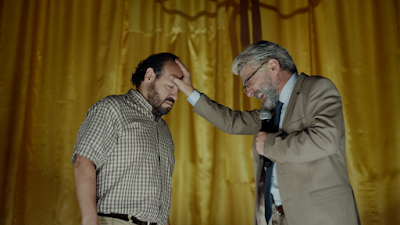 After serving a stint in prison Humberto goes off to reconnect with his daughter. She is being raised by her grandparents, evangelical ministers who hold sway over the community. Reduced to earning a living by singing at wakes and other religious function Humberto begins to chafe at the restrictions his in laws put on him and his daughter.

Slow building low key drama has a real punch for anyone willing to go along for the ride. The film is a killer look how evangelical religions are shaping communities and not always for the better. I was rocked since this is based on what is happening in Latin America and is currently threatening to happen in America too where far right groups are seeking to take control of the country.

I should mention that if you see the film don't expect large explosions of fireworks. Expect instead to be brought into the lives of the various characters surrounding Humberto, to fall in love with them and then be moved what happened. I was rocked by the end of the film. Its a heartbreaking sequence where choice is truly taken away.

This is a wonderful small gem of a film. Finding magnificent films like this is the reason that every year I make a serious effort to see as many Tribeca films as I can. While it results in many misses and hits, some times, as in the case of THE VISITOR, I discover a film I have to try to sell to anyone who will listen.