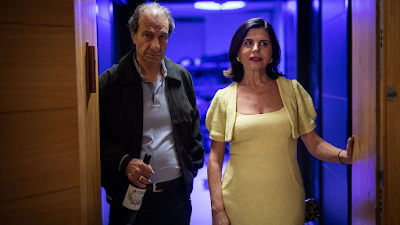 It’s a familiar feeling, the streetlights passing overhead as you head home at the end of the weekend. In childhood, they signify the return to school, in adulthood, going back to work. Part of the late night drive of malaise that slyly asks, “Did you do enough?” And the streetlights flit by, your freedom fleeting behind you. Karaoke, a small Israeli film that mostly takes place within the confines of a single apartment building in the suburbs of Holon, south of Tel Aviv, opens with the image of these streetlights. The film centers itself around Meir (Sasson Gabay) and Tova (Rita Shukrun), a middle-aged couple married 46 years, who have seen the streetlights in their lives, who feel the flitting, fleeting years slipping away into routine, repetition, and emptiness.

Routine is a rut that can be inescapable without some jolt to notice it. That jolt comes to Meir and Tova in the form of Itsik (Lior Ashkenazi), a Barry Manilow-looking rich bachelor who moves into their building’s penthouse, drives a Maserati, and throws karaoke parties for the young and desperate. Itsik has taken the path that diverged in a yellowed wood — he is something aspirational for his middle-aged neighbors. Wealthy, free, uninhibited. One can’t quite imagine Itsik having a quiet, awkward, impersonal dinner with family out of routine. He lives big.

There are some enjoyable highs to be had as the film enters certain euphoric moments — Meir seeks to escape his quiet inwardness, Tova to break the shackles her marriage imposes. Itsik’s apartment is lit with the neon blues and reds of otherworldly escape, and the scenes where he inspires the couple to step beyond their boundaries are where writer-director Moshe Rosenthal’s work expresses something like true emotion. But that’s only partly there.

Karaoke is all about malaise, the boredom of going on the same vacation every year for 46 years, of having the one pair of shoes for the rare good times. In exploring these feelings of boredom, the movie becomes a snoozer itself, plodding forward without a real sense of direction. Watching it reminded me of another middle-aged study of malaise from a few years ago, The Land of Steady Habits. While describing it to friends, I said it was a movie about miserable people being miserable in Connecticut. My wife reminded me about it when I told her about this movie: “they’re not in Connecticut.” They’re not quite as miserable, either. Just bored with a life that repeats itself. I found myself feeling the same.