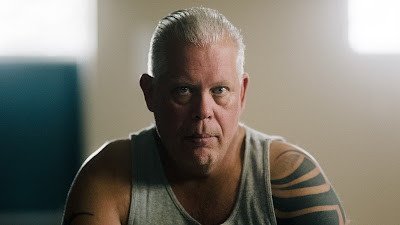 STRANGER AT THE GATE is one of the best films I’ve seen in 2022. It’s certain to be a front runner for the Best Short Documentary Oscar. It is a magnificent film that tells a wonderful story and helps restore the notion of what true Islam is all about.

The film is the story of ex soldier Mac McKinney who returned from the Middle East full of rage. He absolutely hated Muslims because of all the terrible things he saw while he was on duty.  Coming home he found the fact they were in his home town painful. It was so painful that he decided that he would build a bomb and blow up the local mosque.  And then something happened, he met the people he was trying to destroy and he realized that something wasn’t right with the way he saw the world.

While you pretty much know how the story is going to go, there is also no denying that the end of the film you will either be a misty or out right sobbing. The pure emotion and humanity of the story is so strong that you can not help but react.

I started watching the film because it was sent for me to cover as part of Tribeca. I was going in out of a sense of obligation. When I put on the film I kind of groaned because I couldn’t understand why the film was a half an hour, I mean, there isn’t much to the story is there?

No there isn’t and yes there is. Director Joshua Seftel understands that the importance of the story is not so  much McKinney‘s story, but that the story of everyone around him is. This isn’t the story of one man but a community who stepped up and took in the stranger at the gate. Not knowing who the confused man who came to them was, they did what any good person would do and simply opened their arms and invited them in.  Seftel doesn’t skimp on the lives of these amazing people but instead takes the time to let us meet them and let them tell there story. In fact we are a good way into the film before we meet McKinney.  It’s a brilliant move since we know how misguided McKinney will be.  It is also a look at a community that is truly living by the teachings of Islam and not the twisted one we see every night on the nightly news.

That Seftel does this is mind boggling. I say this because in almost every other documentary on an event that effects a community the director only gives us a cursory sketch of the people involved. If we are lucky we get a look at one or two people, but we never get a real sense of the people involved as real people. STRANGER gives us a sense of the whole community- the real community and not just a bullet point version.

Additionally Seftel does this with McKinney. In a similar move we see McKinney through the eyes of his family before we meet him. It softens thins to some degree but it also strips away preconceived notions. We are not going to see  him as he first presents himself. We shake our heads as he speaks because we see him through the eyes of someone who loves him. The result is a film that transcends cliché.

This film will move you.

As I said at the top it is one of the best films of 2022 and almost certain to noticed by Oscar.