My Love Affair With Marriage (2022) Tribeca 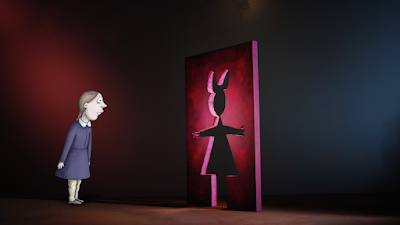 Signe Baumane's masterpiece is the arc of our lives.

Nominally this is the arc of young Zelma's life from age seven to thirty. We watch as she grows up, discovers men, ponders sex and wonders if marriage is what she needs. Along the way we find a possible path to what will make us happy

No one makes films a like Signe Baumane and we are poorer for it. Then again Signe is making films so we should be celebrating each film she gives us.

Let me start by saying I love that Baumane assumes we are adults. She sets things up early and then pays them off later. She gives us a small bit of information that makes later sequences become moving.  She also deals with the subject of life head on and doesn't dance around them. When was the last time you saw any film be this frank about life? I don't mean sex, but raw emotion. SHe gives us characters that are not movie characters but damaged people struggling to get by. Her terrain is not one heading to a happily ever after dream but something more like our own, just surviving until the next day.

I love that it is an honest depiction of the  way we learn and love, interact socially and most amazingly how our bodies react chemically. It puts a new spin on everything. Yes the film is nominally feminist but Baumane, the master filmmaker ,bends things so beautifully that even a guy like me ended up screaming "YES YES THAT'S IT" at the screen.

This is one of the greatest uses of music and songs in a film that I have ever seen. Not only are the songs spot on for the film, they are also damn good on their own. I want an album...and a Broadway show. (oh this would kick ass on Broadway). The final sequences left me sobbing. The first is the end of the story, the second is a brief song of what comes next. The emotional weight of the final sequences wrecked me. The sequence plays as if it is the climax to a Broadway musical which crescendos and the lights go out. I wanted to leap to my feet and cheer and applaud. I started crying- I have no why- I can guess it has to do with the acceptance of life and the figuring it all out. Or not.

I was so moved I contacted Baumane to  babble at her.

Some would say that is wrong,  and I get into battles with writers about the way to write up a film because I wear my heart on my sleeve. I am frequently told that we must keep a distance from what we are watching. This is not how I view it. I think that we need to express how we genuinely feel about a film. The films we love  and want to watch over and over again live in our hearts and so we have to say why they live there. I had to tell Ms Baumane her film now lives in my heart.

This film is magnificent. Its an film about struggling through life and relationships and finding a way through. Its a hopeful film about going on and not being crushed. The opening of the door at the end may be theatrical but it is also one of the most hopeful things you'll see all year.This is one of the greatest uses of music and songs I have ever seen. Not only are the songs spot on for the film, they are also damn good on their own. I want an album....

...no I want to see the film again so I can feel this wondrous all over again.