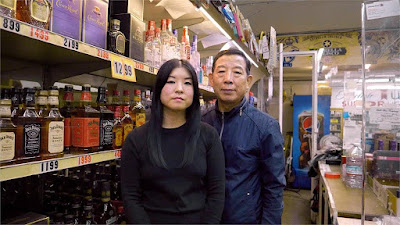 I discovered LIQUOR STORE DREAMS as I do with most truly great Tribeca films, by simply blindly saying yes to the film that is being screened that is right in front of me with no notion of what it is. That is not a knock at the film, but more a statement that Tribeca screens about 200 films every year and it is impossible to know what every film is, particularly since almost everyone is a world premiere. You can’t know what any film really is until you see it. As a result I wander into dozens of film with no clue as to what I’m seeing and coming out changed for the better.

This is nominally the story of director So Yun Um‘s family and the liquor store they run. However she broadens the film by looking at other Korean run liquor stores, the communities they operate in (frequently poor African American ones), their relationship with those communities as well has how everyone and the movies see them. It’s a large pot of things here and Um's blends them perfectly into a portrait of a family that speaks volumes on multiple subjects.

What makes the film work is that Um has no distance from anything. We are in the middle of everything at all times. She is right there in everyone’s face asking tough questions, joking and just watching. She acts as our surrogate opening our eyes and even her own to what she is filming. For example there is a point where she is shocked by an answer her father gives  he since it doesn’t answer how she thought he would. As a result we are open to the questions she asks and the people she is profiling.

This film is stunner. In an age where we are awash in so many docs on race here is one that doesn’t track like all the others. It manages to say more than many others because it s asking us questions in a way that no one else has. By setting up her own world view, including how she was influenced by the movies, we seem to be in a new dialog and it makes us reconsider everything we thought we had figure out.

I really love this film, its ideas and the people in it.