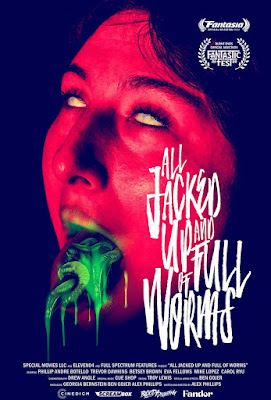 Sometimes chasing a film across months of festivals just isn't worth it. I've been chasing ALL JACKED UP for several months now and now that I've seen it I find that while it certain to push your buttons, but I don't think there is anything to it beyond that.

The film follows several people as they crisscross with each other. A throuple wants to get high together, a man with issues get a baby doll to be his child and sex toy. He meets a hooker who turns him on to taking worms as a hallucinogen. There is a couple who is really into violence. And we see an interview with an older man who has been a dark magician since he was four. Everyone gets addicted to the worms.

Aiming to push every boundary imaginable ALL JACKED UP will cause you to react. Everything in the film is gross. It's all unpleasant from the get go. Everything is dirty. The people are all dealing with their own darkness by letting it out. The result is a film full of people we pity more than like.

Of  course the film is tongue in cheek, I mean four year olds are not really summoning demons and the films tone beyond the "I'm going to make you vomit"  norm is jokey.  Clearly the film wants to keep the audience in the theater since subject matter would normally send people to the exits.  It wants you stay as it shows you horrible things.

But to what end? What is the point? I don't think there is one other than pushing buttons. I have heard the film compared to REQUIEM FOR A DREAM in its  depiction of addiction and I can see it, but at the same time why are we being subjected to this. REQUIEM had a point this does not. The addiction angle is low hanging fruit here since so much else is going on. Worse the plotlines don't feel natural, but rather  aimed toward what is going to gross people out instead of what might logically happen. This is especially true concerning the guy who likes babies and the prostitute, it's all manipulated so that he can have a kind of happily ever after with a wife and living doll (until he can get a real kid to molest)

Weirdly, while my buttons were pushed, I'm not really offended by what's in the film because it's clear the filmmakers are just button pushers aiming to get everyone's panties in a bunch. If they feel that's what they have to do to get noticed more power to them. I just wish they had made a film that made me want to see it again instead of taking a Lysol shower.

Ultimately I'm not a fan of ALL JACKED UP AND FULL OF WORMS and I can't recommend it because out side of forcing a reaction there is nothing here, not even a good time.