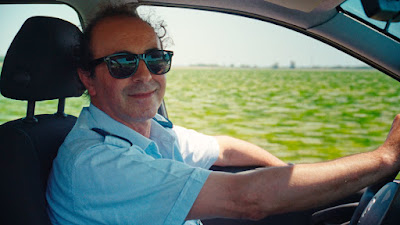 It opens with an almost ten minute single argument about trees where Pier Luigi (Gigi of the title and the directors uncle) argues with someone off screen about the trees on his property. The film then follows Gigi in a series of long takes as he goes through his daily routine patrolling around his village and deals with a rash of suicides where people throw themselves in front of trains.

A blending of documentary and narrative, this is a film where much is not said and not seen (things happen off screen). It a film that moves at the pace of the country. There are long car rides where nothing happens. There are conversations, some of which are mundane. For example an officer riding with Gigi discusses the need to have the grass cut in one location for safety reasons. At other times the discussions are more philosophical.  We are not given everything. Gigi is revealed to be a ladies man, but we don't really see it. Other details are just left hanging. There are no big chases or crazy action just life unwinding at its own pace.

I liked this film, but I was in the mood for something different. I was ready for an off beat character study and I was willing to go with the slow pace and long takes. At the same time I could completely understand if some people fell asleep on the film because it's a bit too leisurely...

...on the other hand Gigi is quite a character and a joy to hang out with.