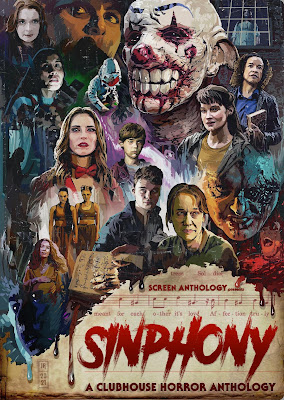 Opening Friday in theaters and on digital after playing the Brooklyn Horror Fest  this nifty horror anthology opens everywhere and on digital on Friday.  The film consists of nine short films from people connected to the audio platform Clubhouse its a fast moving ride on the dark side.

I enjoyed the hell out of this anthology. What I particularly loved was that all of the films are actually pretty good, and while some are better than others there are no clunkers in the bunch. That's a rarity and the fact that I can't honestly say there was one or two that I would cut out says a great deal.

While the film is creepy and spooky I don't think any of them are truly scary, though there are moments such as seeing weird spores in EAR WORM, or the the ringing phone faces in FOREVER YOUNG.

Actually the  problem with this film is the running time, this should have been longer. A few of the films could have used a bit more time to build scares instead of just moving toward a gotcha moment (I'm looking at you LIMITED EDITION). I'm not saying the films need to be features but there could have been a little bit more breathing room.

And apologies for not doing a deep dive on all the films, the nature of most of the stories is such that if I talk about the plots there is the danger of spoiling the twist at the end,

Quibble aside this film is worth a look- hell there is a good chance it will end up on your Halloween playlist every year.