Gary Mule Deer: Show Business is My Life But I Can't Prove It (2022) Indie Memphis 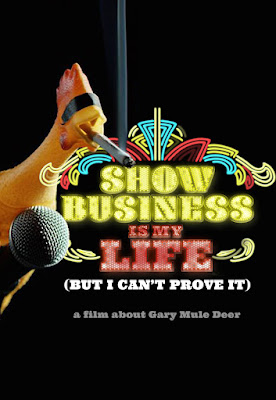 Gary Mule Deer has been on the comedy scene for almost 60 years. A prop comedian  who started as a musician who used comedy to cover his mistakes. Along the way he became a comedians comedian. Everyone loves Gary as is testified by the talking heads in the film Dave Letterman, Jimmy Walker, Jay Leno, Alice Cooper, Conan O'Brien to name but a few.

In the 1970's and 80's Mule Deer was everywhere from talk shows to variety shows  to game shows.  It was on TV that I feel deeply in love with his humor. Punny, clever and totally unexpected he was a guy who taught me to see the world differently and infinitely less seriously then many of the adults I encountered growing up. Mule Deer helped to warp me into the person I am today.

I absolutely love this film. One part celebration, one part greatest hits reel and one part biography, this is everything you ever wanted to know about the man and his humor. Its a wild and crazy ride that will have you doubled over with laughter from start to finish. Never have I run a cross a biography of a comedian that was as funny as this film is.

This is one of the great hidden gems of 2022. If there is justice it will get discovered, picked up and released wide where it will spread the legend of Gary Mule Deer.