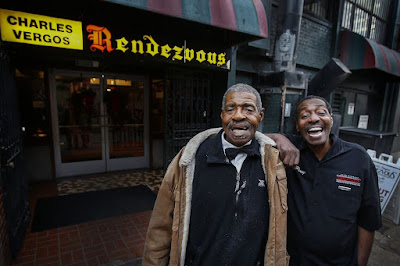 When you see THE 'VOUS make sure you have dinner plans for after you see the film. And don't think you'll be safe by having dinner before hand, this film is so full of BBQ that you will be hungry again by the end.

This film is a portrait of BBQ joint The Rendezvous in Memphis Tennessee. As the restaurant celebrates it's 70th year and prepares to shift ownership into a third generation of the same family, the owners and staff ponder the last seven decades and how times have changed.

The Rendezvous is not any place to eat, its where all of Memphis and much of the world goes to get a bite. The Rolling Stones are regulars, as are Presidents and other very important people. The staff has been with the restaurant for decades, not one or two but five and six. They are part of the institution and when they retire it's a big deal- famous people stop by to say goodbye. They also make a mint in tips crossing the hundred grand mark.

This film is a celebration of the restaurants past and a look forward to the changing of the guard. We watch as things change, including the menu which now has vegetarian options. We also see the great love the famous and not so famous have for the food and the people who serve it. I love that we get a real sense of the sights and sounds and smells of it all. Its a magnificent experience only marred by the fact that it makes you so damn hungry you want to flee the theater to go get some BBQ.

One of the real joys of the film year, it is recommended for anyone who wants to spend good time with good people and have a genuine cinematic meal of the highest order.