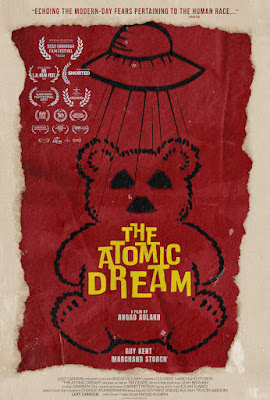 In 1964 a son-in-law visits his cranky mother-in-law who refuses to move from watching the TV. She is convinced the end of the world is coming and her only companion is a stuffed bear.

Oscar qualified short film  is a lovely little poisoned confection. Its a dark tale of the end of the the world with a sting in its tail. It is a well made little film that gets under you skin.

The one problem with the film is that the dialog contains frequent F bombs.  Even allowing for the fact that the word was not as frequently as it is today, the placement of them is oddly chosen. They seem to be there not because of the natural usage of the characters but rather to act as punctuation or effect. We notice their placement and step out of the film.

Quibble aside this is a gos worth a look.od little film that