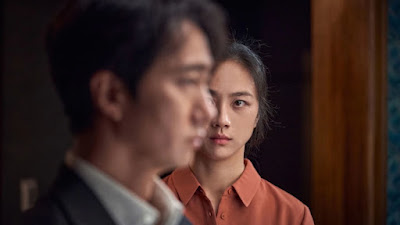 A detective investigating the death of a mountain climber becomes obsessed with the dead man's wife. Things become complicated when the detective finds evidence that it may have been murder instead of an accident.

Park Chan-wook  make what he calls a "romantic comedy" and the result are a funny but completely heartbreaking film. Yes, the film will make you laugh at times at the comfortableness of a man lost in love, but as things proceed the film turns slowly tragic as the would be lovers are pushed farther and farther apart by circumstances and their own prejudices.  The result is one of the most crushing endings in years.

This is a great film, it's a technical marvel that if fun to watch to just see the craft of the film. This is a technical tour de force and it reveals just how good Park Chan-wook really is. The best part is that as the film winds down the film hooks us emotionally. We care about the characters on a deeper level then we would in a typical rom com...though somewhere in the second half the (decidedly dark) rom com gives way to grand tragedy.

The Sunday afternoon screening at the New York Film Festival was a blast, despite turning out some of the most violent and ugly films Park Chan-wook is a very funny guy especially when trading quips with Park Hae-il. He's a guy you would want to have a beer with and just shoot the breeze. Listening to him talk made me love the film more. It was a joy finally getting to see him speak after being a fan of his for decades.

Recommended for anyone who likes to mix light and darkness in their romance.