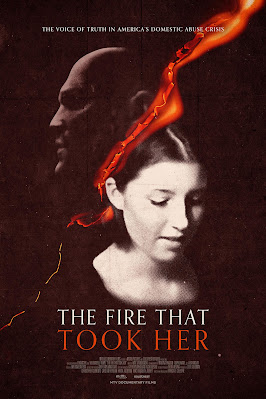 Judy Malinowski was doused in gasoline and set on fire by her boyfriend. She survived for a while and gave testimony that was played her be boyfriends murder trial.
At the top if you can not deal with graphic images, a closed circuit camera captured the event and we see images of Judy in the hospital right after, then stay away. That's not hyperbole, that's a friendly warning.
This is a good look at a case of domestic violence that ended tragically. This is the story of a young woman who met the wrong guy and paid the price when she couldn't get rid of him. It's a dire warning of the extreme things that can happen when  a bad man gets his clutches on a good woman.
To be honest as affecting and important as the film is I've got one issue with the film which makes it hard for me  to wholeheartedly give myself over to the film and that is the film spends a good portion of the film talking about the fire and not focusing on Judy. Yes we get to know a little bit about her, but we are mostly focused on the fire and how her mother found out about the attack. We don't get a handle on the woman who was murdered the result is a distance in the story that shouldn't be there.
Quibble aside this film will kick you in the chest. It's not so much the violence and its aftermath, but the psychotic nature of Judy's ex. Spinning story after story as to what happened and explaining how he didn't really do anything wrong will chill your bones. There are people out there like that and there is very little we can do to stop them until they cross the line.
If you need a reminder how bad domestic violence can get, see THE FIRE THAT TOOK HER, it will crush your soul.
Posted by Steve Kopian at October 21, 2022