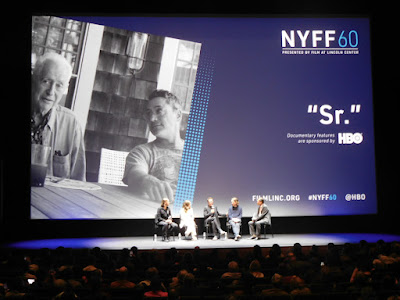 This is a portrait of Robert Downey Sr that focuses on the relationship between the father and his son. It is a giant hug of a film that left me sobbing.

Not only is this a film about Sr and his films but about his son who clearly loves his dad and takes a great deal from him. The pair are friends and co-conspirators at times as they tell of their antics in and out of the film world. The film follows Sr as he puts together his own version of the project. It also charts how the family was affected by Covid and by the rapid onset of Sr.'s Parkinson's disease. It would take his life not long after he finished his version of the film.

I don't know what to say except I loved this film. Watching the pair of Robert Downeys on the screen I was struck by how their relationship mirrored the relationship I had with my dad in his final years. Sequences hit  me like a ton of bricks as I saw myself reflected in the events happening before me. This is not to say that the film won't work if you don't connect to it, rather it's simply to state that I some how ended up with skin in the game.

As a film unto itself SR  rocks. Its a glorious portrait of a man whose films (PUTNEY SWOPE, GREASERS PALACE among others) altered how filmmakers saw what could be done with film. It also a wonderful portrait of a man with a wicked sense of humor and wonderful turn of a phrase. Listening to Sr make jokes and crackwise with his sun and wife is just so much fun.

What makes this film special is that this is the rare "Hollywood" doc where the people in it come off not as high and mighty but rather damn near close to us. Yea they have more money but they come off as regular people.

I love this film to death. It is so warm and inviting. It's a big hug of a film.