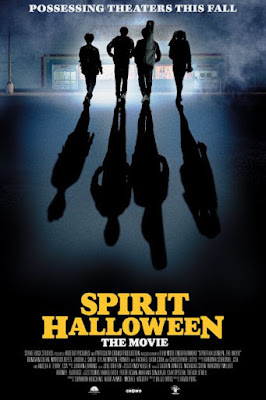 A young man grieving the loss of his father to cancer and dealing with his mother remarrying takes a couple of friends and stays over night in a remote Spirit Halloween store.

Family aimed fright film is better than it has any right to be. Certainly it is in no way scary if you’re over the age of five, it is still a great deal of fun. I smiled my way through the film from start to finish. While the film echoes way too many films of the past, it cherry picks its moments from those films and uses them to good effect here.

And before you ask, no the film isn’t perfect. There are too many logic problems  and your brain would explode if you try to sort them out, but this is not made for anyone who would even think to take the movie apart. If you really need to know how it possible for them to stay over or why the store is in the middle of no where this film isn’t for you. You need, in the words to the theme song of MST3K,”just relax”.  I mean the film is only about 70 minutes minus end credits so there isn’t time for details.

If you can think like a kid or are a kid you’ll love this, which is probably good since the film is destined to be a Halloween staple.