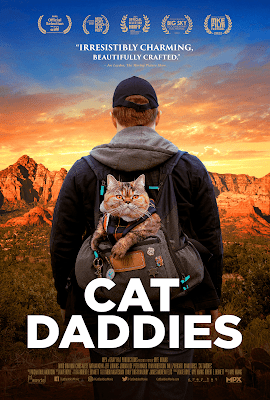 Full disclosure I live in a house with five cats.

Cat Daddies is about a group of men who have cats and don’t really care who knows. Indeed many of them have YouTube and Instagram channels where they flog their cats for everyone’s enjoyment. The film is a look at how cats can help make people better and also bring them together.

For me the most moving part of the film was the story David a homeless man and his cat Lucky. Both man and cat are helping each other get along. This is especially important for David who has cancer,

I don’t know what else to say. This is a sweet charming and loving film that will delight you and make you feel good. It also might make you go out and get a cat, or two.