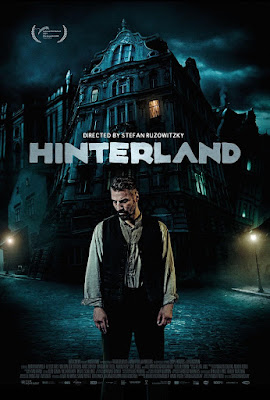 A soldier returning from the trenches of the first World War finds the city he once knew has become a weird surreal landscape. Back at work as a detective on the police force he is thrust into the case of serial killer murdering returning veterans.

Mostly shot on a soundstage with blue screens this is an impressionistic take on the surreal world of Europe between the World Wars. Looking more like a color version of the films coming out of Germany in the late teens and early 20’s this is a film with a lot on it’s mind. Yes it’s a solid thriller but it’s also an allegory about society in the wake of the war and how that lead  to the next.

While the mystery engages, the allegory makes it hard to fully latch on to the characters because some times they do things that only make sense in the exploration of the themes and not in reality. I was engaged but I wanted to be fully invested. The film also suffers in that the blue screen style of shooting puts occasionally doesn’t  mesh with the actors and they seem disconnected to their surroundings.

Problems aside this is a film I like and really admire. I don’t know when it was that I saw a film as invested in creating a world and environment and tying it to the story it was telling. This is a film that is going for it with a gusto rarely seen in cinema any more.  No, it doesn’t wholly work but it still manages to be a really cool film because we are watching a film where a director is giving us the story he wants to tell to the best of his ability. This is a film that is in love with film and story telling and as a result we are willing to sit and take notice.

In its own way this is a stunner and a must see.