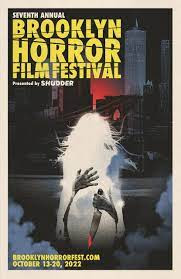 This week the Brooklyn Horror  Film Festival starts.  Only a few years old it already has risen to the heights as one of the premiere genre festivals in the country.

This week the Brooklyn Horror  Film Festival starts.  Only a few years old it already has risen to the heights as one of the premiere genre festivals in the country.

As we’ve done in the past we’ll be wading in with coverage. Of the goodies. I’ll be doing some remote coverage and Reid Ramsey will be on the ground reporting from the trenches.  We should be able to get coverage of a good number of the titles covered.

I’ve also seen a number of other titles that I haven’t written up previously.

BAISE MOI is running as part of the festivals look at disturbing French films. The film is a poke in the eye of conventional film viewers taking a feminist view of things and making everyone uncomfortable. While I’ not a big fan of the film it is one that you really should see if you want to be forced to engage with what you are seeing.

The film is screening several films from Lucio Fulci THE BEYOND (remade by Ted Geoghegan as WE ARES STILL HERE),  CITY OF LIVING DEAD,  NEW YORK RIPPER, CAT IN THE BRAIN and HOUSE BY THE CEMETARY which are all the very definition of Italian Horror in the late 1970’s and early 1980’s If you have never seen them on the big screen you need to go because seeing them big is very different then seeing them in the living room. In a theater you can’t escape and can’t look away or fast forward.  You have to take the horror and dream logic head on and make it art of your soul. They are also showing his classic ZOMBIE which was billed in some places as a sequel to Romero’s DAWN OF THE DEAD. It’s a living nightmare of film that upped the ante on Romero’s vision and made it more visceral.  Again- another must see.

The festival is also showing  Brian Yazuna’s SOCIETY. If you’ve never seen this film just go. Don’t read on it just go. I will say that the film about a young man’s discovery of a rich cult and it has one scene that is the stuff of shared nightmares. Trust me on this even if I told you what it is -you still won’t believe it until you see it and that’s all I can say….other than if you have never seen the film do so.

There is also a world premiere of a chronological cut of Gaspar Noe's IRREVERISBLE. The film was originally the story told backwards and it's like a punch in the face. Noe apparently has put it back in order and I'm curious if he put more material in. I say this because over the years I've seen several home made versions that did the same thing and to be honest the film doesn't play as well. Then again what I saw was  done on with two VHS decks. DO let me know what you think when you see it.