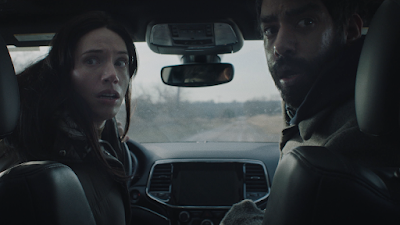 Mali Elfman's NEXT EXIT is a bittersweet film. The film postulates a world where the afterlife has been confirmed so people no longer fear death. Indeed suicides have skyrocketed. A man and a woman leave New York to head to San Francisco where the scientist who proved the afterlife works. They are heading off to die as part of an experiment. Along the way a friendship and romance blossoms.

This is a dark but hopeful film that is one of the best films at Tribeca. The central story of the road trip is quite good with Katie Parker and Rahul Kohli selling the romance and making the trip worth taking. They are the heart and soul of the film and the reason why the film works as well as it does.

As much as I like the film seeing it  a second time, where I was focusing on it more intently for a review, made me realize that the film has some real problems that kind of got worse the second time around. Despite the road trip portion of the film being gangbusters, the world it takes place in is a real mess. Elfman over explains things to the point you realize that the world doesn’t make sense. The film throws a lot of details at us  that we are supposed to set up the whole situation, but if you stop and think about them you realize they don't work. The truth is  we  don’t need all of the details, especially since once we get on the road the film pretty much throws it all away to give us two great characters to follow. This should have been a little film where the details were kept to a minimum and a bit vague because they get in the way of the internal logic and the magic of the two performances.

That said the romance shines. It’s a beautiful story of two people finding something they were missing. Its a story that warms the heart despite the fact its set in a world of death and darkness. I really liked it a great deal.

If you don’t mind traveling through some darkness NEXT EXIT will make you feel good.