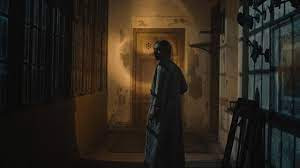 A young woman take a job as a nurse working for a rich countess, She hopes that the woman will be able to help her get information on her parents. As the questions begin to be answered magic is performed and things begin to take a dark turn.

Marie Alice Wolfszahn​ first film is a stylistic tour de force. It’s a beautifully made film that sucks us in with it’s mix of technical wizardry and nicely drawn characters. It’s a super creepy film that for the most part works like gangbusters.

The only problem for me is the ending which is much too cliché. Its unremarkable nature is made worse because Wolfzahn has otherwise created one of the most enjoyable horror films in ages.

This is truly a small gem of a film and not only will you be watching it repeatedly you will also be jonsing for Marie Alice Wolfszahn​'s next outing.