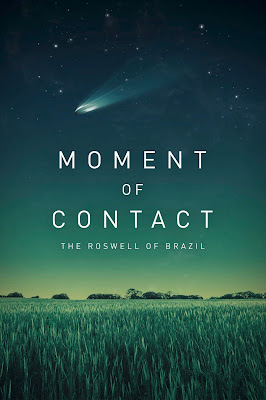 Director and investigator James Fox  goes to Brazil to investigate the 1996 Varginha Incident. This is a case of an alleged alien craft coming down in Varginha and entities walking through the town. There was lots of witnesses and the military was involved.
As with all of James Fox's documentary on things from another world this one is a trip. This is a hell of a story that has drawn people to Brazil for the past 26 years. Yes he  fills the film with bits from Stanton Friedman and Roger Leir, but more importantly Fox talks to the eyewitnesses about what happened and he lets them just tell their stories. The result is a film that is truly compelling in the best sort of a way.
Do I believe the story? It's clear something happened. I don't think it's all mistakes and incorrectly seeing things. Something happened and it rattled people.
True or not this is a great little story. While I could do without some of the "reality TV" tropes that are in the film (camera crews in the shots and over reactions on camera) I still was hooked by the story. How hooked? I watched the film a second time just because I was having so much fun.
Highly recommended if you like this sort of a thing.
Posted by Steve Kopian at October 17, 2022