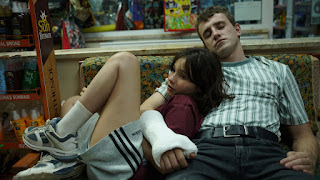 One of the most surprisingly intimate NYFF60 films centering on a father-daughter relationship, Charlotte Wells‘ AFTERSUN, hits you square in the chest, over and over. Eleven-year-old Sophie and her father, Calum, go on their annual holiday. A resort in Turkey is the backdrop of a screenplay that has three distinct narratives playing out simultaneously. By which I mean AFTER SUN is a coming-of-age film, a story of depression and the unbreakable bond between a parent and their child.

It is quickly apparent Calum is struggling with his mental health but attempts to make the most of his time with Sophie. Like most kids, she is keenly aware of her father’s tendency to please, regardless of his financial circumstance. Their vacation, while average to Sophie, proves to be their last.

The film utilizes camcorder footage. Sophie is behind the camera. The film’s cinematography also lends to the intimacy, with close-ups of hands and faces, as well as the use of reflections, in everything from mirrors to glass doors and television sets. Besides the fantastic costumes marking the 90s, the soundtrack makes it loud and clear while subtly enhancing the story. Carefully chosen tracks like “Under Pressure,” even though it’s from 1981, speak volumes.

There are moments in the film that appear unusual until you realize the larger picture. Calum frustratingly attempts to teach Sophie a self-defense technique that feels inappropriate for her age. He is unbothered by her confession of a first kiss and more focused on the fact that she felt comfortable sharing about her life. He offers her a sip of beer. What draws us into the screenplay is an intoxicating mix of awkward moments juxtaposed by a relationship one strives to have with their offspring. The care Calum expresses, the time feels weighted and invested.

Paul Mescal is extraordinary. The emotional highs and lows draw you into the film. If you’re a parent, they also cause concern for Sophie’s well-being Frankie Corio is a revelation as Sophie. She is funny, spontaneous, observant, and fearless. Mescal and Corio share an onscreen bond that feels genuinely familial. I was blown away by their chemistry. Charlotte Wells has an undeniable gem here in AFTER SUN. You must seek it out.