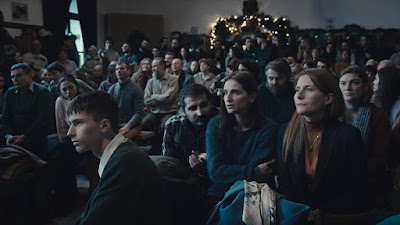 Cristian Mungiu's R.M.N. is a damning look at racism and the fear of the other that pervades the world.
The plot of the film has a man named Matthias returning to his home after punching his boss through a door when the boss called him a gypsy.  In the small village he really can't find work, there are no well paying jobs and most people are fleeing to elsewhere in Europe for the same well paying jobs. The lack of decent pay is a problem since the local bakery can't find workers so they are bringing in people from Bangladesh. As the villagers, many of them actually transplants from Hungary, begin to threaten the dark skinned new comers Matthias finds his life unspooling.
Mangiu's film is a killer. This is a look at the world as it is as people flail about in fear of the "invaders" coming into their towns unaware that they are seen the same way elsewhere in the world. My jaw was hanging open through much of the film since a lot of this plays as if its actually a documentary.
The feeling of this being a documentary was  strongest in the film's centerpiece a 17 minute single take town meeting where the layers of civility are peeled away and the darkness in everyone's heart is laid bare. It's one of the truly great moments (or 17 minutes) in the cinema of 2022.  It's based on a video of an actual town meeting from the area where the film is set. The real video shook things up and forced resignations. Here the sequence left the audience dazed and broken as we see just how badly we are screwed.
After the film there were long long conversations. So many people wanted to talk to Cristian Mungiu he said he would go on instagram to talk to anyone with questions. Hubert Vigilla and I  were so rocked we ended up going to a late dinner because we had to talk about the film. A week on I'm still pondering the film and what it's revelations say about the world.
What a shattering film.
Highly recommended- especially in this us vs them world we live in.
Posted by Steve Kopian at October 18, 2022