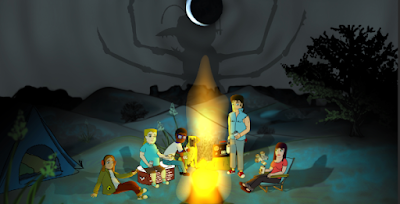 A trip into the desert by three friends, one of the boys older brothers and his girlfriend  turns monstrous as a local horror legend turns out to be true and there are a few other turns in the offing.

Zach Passero's animated feature film has been in the works for 8 years as he hand drew the entire film. Clearly it's a labor of love and the results  are a good film that  reminds me of the sort of thing my teenage self might have put on the screen given the chance (That's a good thing.)

Looking and playing like the work of a gifted high school comic artist, WEIRD KIDZ has a genuine feel of being taken from a high school comic. It's brash and raw and gory and clever in ways that anyone who hasn't worked for years in the Hollywood salt mines is. Yes it riffs on scifi and horror tropes and some bits of pop culture in some ways we've seen before but also in ways we haven't. WEIRD KIDZ held my attention in ways that many films didn't because I genuinely wasn't sure how it was all going to go.

Is the film perfect? No, some of the jokes are a bit too juvenile and crash instead of land, and the pacing of the first half is a bit too slow, but once the second half gets going an you're wondering what the F is going on the film is worth dealing with the weaker parts.  In all seriousness I was discussing the film with some writers after a screening and everyone of us enjoyed the hell out of it because it is a singular vision of the sort we need more of.