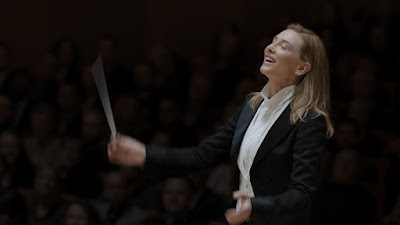 I like TAR. I think it's a good if wildly over long film.  The thing is the more I think about the film the more I see problems.  Because I can't in good conscious  do a straight review, because there are issues that need to be discussed, I'm doing a ON FURTHER REVIEW look at the film. The ON FURTHERs  are a series  of pieces where some one takes a look a film and pokes at it's place in cinema history.

This time out I'm poking TAR, the critical darling that just played the New York Film Festival before opening Friday

TAR is the story of conductor Lydia Tar, head of the Berlin Symphony Orchestra during a period where her autobiography is released, she begins working on a recording of Mahler’s 9th Symphony and her life begins to unravel due to poor choices and scandal.

Hailed by early reviews as one of the great films of 2022,  I was left  pondering the film after seeing, particularly the gulf between what I was told the film was by friends and reviews and what I actually saw. I do like TAR, but I’m kind of left scratching my head the more I think about it, it has logic problems I can't unsee once I started to ponder them.

Let me get this off my chest,  I’m not a particular fan of Cate Blachett’s performance. Yes, it’s being touted as a certain Oscar nominee, but let’s be honest she’s done this before any number of times. This is in some ways similar to her role in BLUE JASMINE. Watching her I felt she was walking through most of the performance instead of living it. Yes, there are some great moments, the Julliard scene, some of the sequences of her conducting the orchestra, but quite frankly the rest is a kind of Cate’s Greatest Hits. Look at all the work she has done previously and you'll see the same ticks played again here.

The other problem I have with the film is it doesn’t make sense on it’s own terms.  As a portrait of a woman crashing the film works really well. As long as we are focused in Tar what is happening to her it’s quite good.   The problem is that all of the plotting, and all the outside details around her don't ever come together her leaving gaping plot holes that shouldn’t be there.

The film opens with a song  and there are a couple of dream shots hearkening back to Tar’s ethnographic studies but it goes nowhere. It’s all fleeting references that don’t tie into anything.

What is the meaning of the weird pattern that sets Tar off? More to the point why is it shoeing up in regard to Tar’s daughter when the girl it was connected was supposedly a dark secret. Why did the daughter make it out of clay?  The implications is that no one other than the Tar and her assistant.

And then one of the huge problems with the film the time frame  of the whole film is wildly off. Yes its clearly compressed because this is a movie, but even so none of it really jibes if you think about it.

At the start of the film we are told that the recording of the Mahler symphony will be happening with in a relatively short time, four weeks, but then things get dicey. The real world notions walk out the door beginning when Tar’s stalker commits suicide and then she is almost instantly being sued and going to be deposed. Really? Courts don’t work like that.

And then the film messes around with POV in ways that are totally bogus. It wasn’t until I  was thinking about the film over night that it occurred to me that the film cheats repeatedly  concerning what we are seeing. There are the “face time” chats that are sprinkled between people close to Tar that are never fully explained. Who is talking to each other while filming Tar asleep or in her hotel room? We don’t know.  More damning is when we see the Julliard scene cut down to a viral video. Tar knows it’s a hatchet job, but the question is where the hell did the video come from? Within the original sequence itself we can see that no one is filming the class. And even if it was filmed  by the person who was at the top of  the seating area, they would not have the angles in the video. The video exists just to add a jab at Tar, but it has no place in the

This leads into another thing that I don’t like which is that the film sets up the notion that Tar is being stalked. As the film goes on it was the girl she seduced, but once she diest the truth of the matter is it is no one in the movie. I know It could be said that it’s the assistant, who clearly had a deeper relationship to the dead girl, but at the same time there is no clear clue as to who it really could be. while it could be any number of people in the story the narrative clues preclude any of them from actually doing. In all honesty I think the stalker is writer director Todd Field and his crew since they are the only ones who are in the places we see in the film  to either record or leave things in places where Tar could find them.  And we know that the things that are pushing Tar over the edge are real because we are given answers as to what some inconsequential things is (say the pinging machine of the sick woman across the hall) but any of the things that are damning to Tar just "are". In my mind the stalker if Fields who appears not to like his heroine.

Films should not break their own rules  - or if they do so they should not get caught. Raymond Chandler said that a writer can ask the audience to believe one illogical thing before they run the risk of loosing the audience. The more impossible things you ask the greater the risk of losing the audience. The more I think about the structure and plot of TAR the more the film collapses in on itself because it is asking us to believe way too many impossible things..

Mind you it’s never  bad  but I don’t think it’s the be all and end all some are claiming it to be.