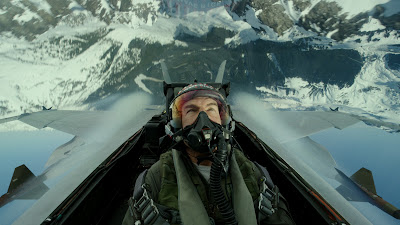 Seemingly too many years on to make a rational sequel Tom Cruise returns to the role of Maverick and somehow manages to make a highly entertaining film that almost hits it out of the park.

The plot of the film had Maverick getting into trouble and being sent to Top Gun to teach a bunch of pilots how to handle a super deadly secret mission. One of the pilot's is the son of his former wing man Goose who died in the first film. As Maverick attempts to deal with teaching the young ones, he has to deal with an ex-girlfriend, resentment from Goose's son and the impending death of his good friend Iceman (Val Kilmer).

Hitting almost all the right notes, the film pretty much exceeds expectations. All of the right notes are hit usually in wonderfully unexpected ways. I honestly didn't think the film was going to work this well. I was delighted and surprised and had to crack out a bucket of popcorn halfway in.

Honestly the only thing I dislike with the film is the final mission. Not because it's not well done, but rather after 90 plus minutes of not doing the cliched thing the film plops squarely into cliche territory. While it travels it excellently, I would have loved the film to have remained cliche free to the final credit role.

Do you need to have seen the first film? Probably not, although doing so will make the references have deeper meaning.

I had a blast, and the film gets extra points for surprising the hell out of me